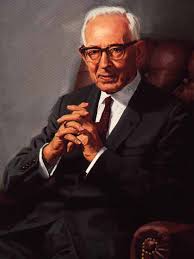 I have a connection to the 10th president of The Church of Jesus Christ of Latter-day Saints.  I was born on his birthday, July 19th (a mere 88 years after his 1876 birth).  I am excited to study his teachings this year in Relief Society.  As I was perusing the first lesson in the new manual for our 2014 course of study, I read the following the words:

My initial reaction was, “huh, that’s not what I was expecting”.  Then it hit me!  President Smith had been born into a family that had experienced many dramatic events in the history of the church.  His grandfather, Hyrum Smith, was martryed alongside his brother Joseph Smith  (the founder) of the Mormon church.  His father, Joseph F. Smith, was only 5 years old when his father was martyred and helped his family migrate to Salt Lake City across the plains.  His mother, Julina Smith, came from pioneer stock as well.  His heritage was rich indeed.  Therefore, being “true and faithful” was a magnanimous task yet so pertinent and straightforward to the heart of the gospel of Jesus Christ.